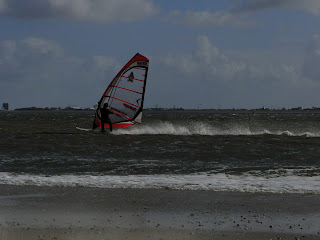 I decided to change my boardrange. I have now 5 starboards, all great in some conditions. But since my car is small (and budget for speed not big) I had to pick one board to sell.

Now I had many many doubts, but W44 and iS107 stay!! First the W54 definitly could go, but later I found it suit very well to my sailingstyle. After this I thought the iS86 could go, but than I did this personal best hour, and the Amstelmeer record session is also still fresh in my mind. Soo the W49, maybe this board can go, I will miss it for spots like Strand Horst, Razende Bol and Texel (de Hors), it is also the fastest board for 7.0, never got the W49 powered up with 6.2 :(.
No easy decision. And this perfectly explains why some have 5 or even more boards for speedsurfing. More is better as you have better solutions for different conditions.
In the end I choose to sell:
iSonic 86 ==> Reason I think it is possible to do Amstelmeer record and hourrecord with W54. It will be sometimes improvement or as fast or sometimes a little bit slower. Only real regret is losing a highwind board for waves/chop. But the iSonic 107 does its work pretty well till 30kn in waves/chop
iSonic W49 ==> I think the W54 suits the 7.0 better, have not tried the board on swell but it will be tested. Only big problem is Strand Horst… W49 is the very best solution for Strand Horst, eventhough I never proved this (wad1team member Johnny Tuin did prove the W49 potential).  But keeping 1 board for 1 spot which is not favorite is to expensive. Also the W44 + W54 should be able to do decent speed at Strand Horst, biggest problem is me over there 😉
Maybe I will buy another starboard to test. I like the idea of futura 93 right now, but also W44 or W49 (2011) or iSonic 90 (starboard doesn’t make it easy with soo much models). But first these two above have to go for a normal price (less than half year old and pretty quick as both did 42kn+). I am asking for iS86 €900,– and W49 €750,–
Also do have a old fanatic falcon 262 for €50,- (good condition)