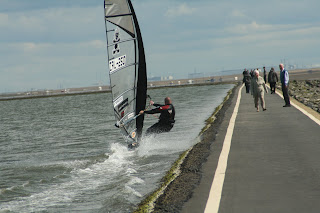 I’m very happy to accept Erik’s kind offer to become an author here on the Speedsurfing blog so i’ll introduce myself. My names Alastair Nichol and I first started windsurfing in 1984 age 12 and very quickly i caught the bug for the sport. For the next few years i continued to progress and improve my skills spending any time i could on the water. At 14 i started to compete on Raceboards on the local regional windsurfing series in the North East of England in the 1986 where i achieved 1st place in the Junior fleet. In 1987 i made the step up to the youth fleet where i achieved 1st place in the Youth fleet that year and also successfully achieved the same 1st place in 1988 and 1989. In 1989 i decided to become a windsurfing instructor to pass on my skills and love of the sport to others being employed at a windsurfing school in Morecambe Bay, Lancashire in 1990. The same year i decided to compete in the under 19 championship where in my first National completion achieved 2nd place in the Newcomers Division which i was very happy with.

From then i decided to concentrate on teaching windsurfing and windsurfing for fun until i moved to my current location on the West Coast of Ireland in County Kerry where i competed in Slalom at Jamie Knox Watersports where i gained 3rd place in the slalom series in 1997 & 1998 and then 2nd place in 1999. In 2000 an injury to my back forced me to stop windsurfing until i was sent for training with work to Portland, Oregon, USA in 2005 and i decided to travel over to the Gorge and try it again and see if my back was able to handle windsurfing again. Thankfully i came through that windsurfing session with flying colours and i bought myself some new windsurfing kit then and there.

For the next few years i just sailed for fun until 2007 where i competed in the Irish National Championships where i gained 4th place overall in the Masters fleet. Soon after this i discovered Speedsailing, bought a GPS and in 2008 competed in my first Speedsailing event at the Irish National Speedsailing Championships where i gained 7th place overall. With this result i successfully gained a place at the Speed World Cup Production World Championships held at Dungarven in Ireland where unfortunately due to lack of wind no Speedsailing took place but i still was able to finish 60th overall in the Speed World Cup rankings in my first year competing at International events.

In 2010 i again competed in the Irish Speedsailing Championships where i finished 4th overall and on the Speed World Cup finishing 69th overall in the Speed World Cup Rankings. Also In 2010 after watching the Raceboard scene for the past couple of years i decided to dust of my old Raceboard to start competing again on Raceboards, travelled across to the UK where I competed in the UKWA inland series, finishing the year 17th overall (2nd Raceboard Unlimited Fleet & 4th Master) which considering i last set foot on a Raceboard 20 years ago i was very happy with.

In 2011 i decided to invest in the current Raceboard of choice, a Starboard Phantom and made the goal of finishing in the top 10 in the UKWA Inland series which i am happy to say i achieved after competing at all 5 events where i finished 10th Overall (1st Raceboard Unlimited Fleet & 3rd Master) in the UKWA Inland Rankings. The Irish Speedsailing Championships is ongoing at present with the first 3 rounds cancelled due to lack of wind but recently we have managed to complete 2 events where each event is a 2 day event and each day i classed as a seprate round and i have managed a couple of 3rd places so hopefully come the end of the year i will achieve my goal of finishing in the top 3 of the 2011 Rankings. Unfortunately due to financial restrictions i have not been able to attend any Speed World Cup events so have no World Ranking this year but hopefully if i am able to get funding i can attend some events in 2012.

For the future my goals are to achieve a consistent top 3 position in the Irish Speedsailing Championship, Improve my overall position in the UKWA Inland Championships and improve my Speed World Cup Ranking. I also have set myself the goal to break the 40 knot barrier and i know I am capable of this figure given the right conditions.

I hope you enjoy what i will contribute towards the Speedsurfing Blog in the coming future and you can catch up with all my latest news on my own website www.irl-250.blogspot.com and if you have questions or need any advice on any of the Speedsailing Equipment i use please let me know.