By the way lots of cool windsurf adventures have been undertaken, I never heard of most of them. Therefor I give these a place on the internet. Not because I want to do it, but it is inspiring for sure!

A normal windsurf kit has been used for this crossing, in contrary to the crossing in the Indian Ocean. The last crossing demonstrated (good footage) that it was really hard and the weather and conditions have to be good enough (winddirection and waves).

Kiters are crossing it too 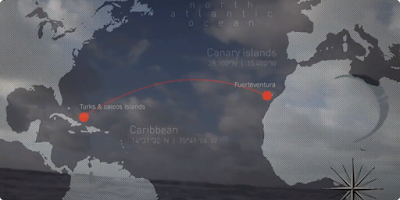 A short overview what I found about windsurfing and the Atlantic:

Stephane Peyron’s bid to be the first solo windsurfer across the North Atlantic goes into its second month this weekend – and if all goes well, he will land on the shores of his native France sometime late this month. Peyron, the French board sailing champion, set off from New York on June 10 on the more than 3,000-mile journey, which is expected to take 40 to 45 days. But the long solo trek didn’t seem to intimidate the 26-year-old adventurer, who already knew the perils of the voyage via a tandem crossing he made last year.

Windsurfers are celebrating the first crossing of the Atlantic by board. Four teams sailed the 2,200-mile journey from St John’s in Newfoundland to Weymouth, Dorset. During the seven-day race, competitors faced 30ft high waves and winds gusting to 35 knots. Jason Gilbert, who was part of a three-man European team to complete the journey, said: “The first thing I want to do now is go for a pint. “But I want to take part again if the race is on next year and I would like to lead my own UK team.”