A story for the advanced speedsurfer / recordhunter or interested windsurfers. This story involves a lot of techtalk and recordhunting stuff (just remember speedsurfing is NOT only about records).Since almost 1 year after witness some amazing stuff but also rumors I believe there is something special in the (dutch) GPS speedsurfing scene, maybe caused by the origine of the Netherlands (living on a delta of rivers with a lot of soft ground (soil) like clay, peat/veen). There is a new ground effect and some speedsurfers used this principle for a longer period of time (without knowing?). The “ground effect 2.0”. You go faster, its easier and can be done with current equipment. Really?? Anyway I decided to share the story and hopefully get some responses.

But first what did we mean with the “original Ground Effect”?
It is about compressing a liquid/gas. At the bottom of a foil/board there is always a high pressure. Ground effect does show when the distance between foil/board and ground is extreme low (with or without water inbetween). Example: when using waterski and behind a speedboat entering a spot with 5cm deep water instead the normal 100cm, there will be more vertical lift and therefor drag surface will decrease. In other words at one point it become much better. 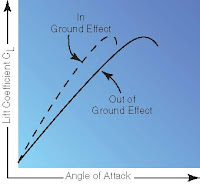 Ground Effect 2.0* ==> what ??
Ground Effect 2.0 this is speedsurfing and running a part of the fin IN the ground. Example: a speedsurfer sailing in 20cm water with 23cm fin. What do we need for a positive effect, a soft kind of soil like clay, it could be 50/50 mixed with some fine sand (It should be soft enough to just sink in a few cm when standing there). Also the ground (bottom) NEEDS to be reasonable flat. How can running the fintip in the ground be a REAL benefit?

Experiment description (I simply had to have some real world experience):
Tested on a tidal spot with very soft soil, using a reasonable proto thin fin, that would break when hitting something massive (for safety reasons). THe ground was tested to be soft enough when standing there my legs dissapeared at least 30cm! In this very soft soil there were shells, when running speedruns I definitly heard hard tapping against the fin. From the moment the tapping begon the equipment started to accelerate significant, it is easy to feel the fastest spot. In this case my fintip was about xx cm in the soil for maximum performance. NOTE: my fin 30cm had scratches up to 10cm from the base without any crash…. Speeds were double the windspeed 38kn boardspeed in 19kn GUSTS or soo.. And in deep water I lost at least 5% speed.
Running the fintip in the ground… Its legal according to the GPS-Speedsurfing records, definitly NOT legal for official World Speed Record. No worries whatever you do (but keep your own safety/health as priority, since nobody does make a living from speedsurfing these days)
General facts that (could) back-up the theory:
*Ground Effect 2.0 is no proven theory, I believe to see some experiences/facts pointing towards this theory. The size of this possible advantage is also not clear. Maybe it is only good for accelerating up to 35-40-45kn…