Topspeeds from Down Under – A closer look

On 10th July 2011 the legendary speedspot Sandy Point in Australia was on fire again. The speeds are super impressive, two averages above 46knots and a new 10sec. GPS World Record with 47.59knots for Craig Spottiswood.
A few small discussions were started if the asymmetrical fins which were used are significant faster than symmetrical fins and so clearly supported these results. Well, I don’t want to answer this question, but I took a closer look on the results. The first I saw was how close 2sec., fastest 10sec. run and 500

In my opinion the big differences between 2sec., fastest run and 500m are mostly th 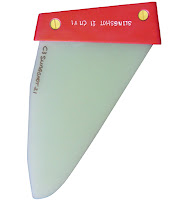 e result of bearing off from a sandbank or something like that or limited area. Maybe asymmetrical fins have advantages over symmetrical fins, but I don’t think this is the only reason for Craig Spottiswood’s results (of course beside the material he is an outstanding sailor and dominates the dayrankings very often). In addition there are sessions done with symmetrical fins and really small differences, for example Jacques van der Hout with 48.33/47.45/46.61 at La Franqui.

It’s really hard to figure out the differences between symmetrical and asymmetrical fins, probably a 1on1 comparison is the only way, but in my opinion the big results are more supported by perfect conditions and really good sailors!