It was not planned, it just happened. Windsurfing in wind below 2kn, been there done that after today. There should have been 12 kn last weekend (northerly wind)… I thought lets do a Almere-Amsterdam crossing…

It wasn’t a normal Sunday however, it was jinxed Sunday. In the morning I was confronted with the fact I am just a village-man in the city. Innocent, I parked my car twice on the sidewalk (once in front of a bakery to get some bread and the second time to load my raceboard on the roof). However the city parking officers weren’t amused, and gave me a ticket, a good reminder that this behaviour is absolutely not allowed in the city of Amsterdam.

After eating breakfast and loading the surfstuff I drove to Almere for a session. On the raceboard I could go out pretty OK. I thought, well this should be fun once the wind will turn on (at that moment it was 3-5kn). However the wind decreased after 40 minutes and I followed the weather pattern in the sky and looked upwind to other sailors. I didn’t see anyone have better wind, I thought maybe there is some kind of front which has to move and will bring good wind… 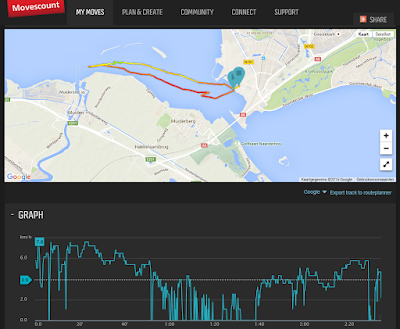 At Muiden I actually didn’t move anymore (visual at least). My speed was below 2 km/h. A new personal best I guess ;). I sat down on my board, still very positive laying in the sun (I thought this should be fun once the wind turns on). 10 minutes observating around me I started to doubt the windprediction, another 5 minutes later I thought I better get back (because 5 km swimming takes a long time)..

Guess what is the fastest way to move (almost) without wind on a raceboard?

Number 3 was the quickest, however it required a different pumping technique compared to slalomstuff and >12kn wind. Pretty fun, in the end I even got the speed above 4 km/h ;). Number 2 was OK for 1-2km/h. And number one was good for 1-1.5km/h and cold hands….

The thing learned was: with pumping you can go double or triple the windspeed on a raceboard (on a crosswind course). A worst-case scenario (middle IJsselmeer) where you have to surf 10 km in 2 kn wind would take 2.5 hours. A long time, but not impossible or dangerous.