Yesterday should be a big day with really strong winds in the Netherlands. I decided to go to Strand Horst for a nice Speedsession. The wind was much lighter than expected but it was nice to do the first session with the Tectonics Nomad 23cm.

I’m using the Fanatic Falcon Speed (the old one, introduced in 2006) for the second year now.
At the beginning I’ve used the 25cm Select Caspar Speed like many other do/did. To be honest, this combination is super on pure flatwater but as soon as the water gets a bit choppy I have problems. The board doesn’t feel really balanced and I have lot’s of spinouts. For sure the reason is my sailing style, because other people are going really fast with the combination in the same conditions, but for me it doesn’t work.
My second try was a 26cm Choco Fins Mach 1. I like these fins a lot under my Tabou Manta 54 and although in combination with the Falcon Speed it suits me. I don’t know if it is because the Mach 1 is G10 and the Select Caspar Speed Carbon Prepreg. In any case, I have more control in the chop with the Mach 1, which results in faster runs. A slightly negative aspect is a bit bumby feeling while going deep downwind.
Some weeks ago I had the option to buy a Tectonics Nomad 23cm. I heard the fins should be super safe and fast, sounds like exact the fin I need and of course it would be interesting how the modern concept of a widebase fin works in combination with the relative old shape of the Falcon Speed. What should I say, in my opinion the behaviour of the board completly changed with this fin. The board feels balanced and gives lots of confidence in every situation. I had one good gust and went deep downwind, the board accelerated perfect. I felt more like gliding over ice than flying over the water, great. The result was my first Speed over 40knots in definitely not perfect conditions! 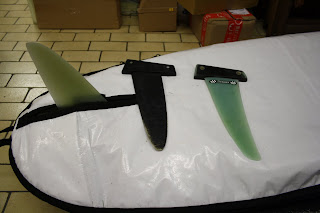 PS:
Sorry for the lack of updates the last couple of weeks, I try to publish more regular in the future.